Do you believe in luck? Wishes?

Well, either way I’m hoping for some this birthday month. Last year I had a big birthday. And I don’t mean I had a massive party with a band and fireworks, though fireworks would be cool. I mean who doesn’t love fireworks? Cause ummm FIREWORKS!! I mean that I hit a number with a zero. One that as a kid seemed so so old it was ridiculous. Because, well I had (and still have) young parents so my parents didn’t hit that number until before I was 20, just….it seemed like so so far away. Anyway, it seemed quite grown up. And then I hit all the numbers and that one and well, 30 really felt like my turning point. And it was. So much happened to me after that. I made so many positive changes.

Anyway, I turned 40 last year and I got some very special gifts from the chap and little (and others!!) and one of them was a necklace with pendants (is that what they’re called? I rarely wear necklaces…not a huge jewellery wearer) that I’d spent forever choosing and deciding on stamped wording for. I’m terrible with decisions (have I mentioned that before?) and couldn’t decide which pendant/s I wanted, whether I wanted something inspirational stamped or just names or dates or??? One pendant or two? So many choices. And then there was the necklace leather colour. Cue headslap! So many choices! You get the idea.

We ordered the necklace from Honeydew & Violet  (and you should take a look at them, Dani is fabulous and the pendants are amazeballs!) and I finally chose two pendants. One representing E and one for the chap, myself and some words I wanted to work on and stay with. Like courage. Things that are all around me and that I want to foster. And that’s all gone so well, here I am writing a blog after all!!
I cherished the necklace, something I’d (and every other person in my world that I’d asked opinions about it) spent a lot of time on with Dani. She’s awesome and so lovely…anyway…earlier this year I lost it 🙈🙈🙈 I went to Spotlight and Westfield shopping centre in Narre Warren, and spent much time looking, leaving my details and calling about it. It’s never been found. 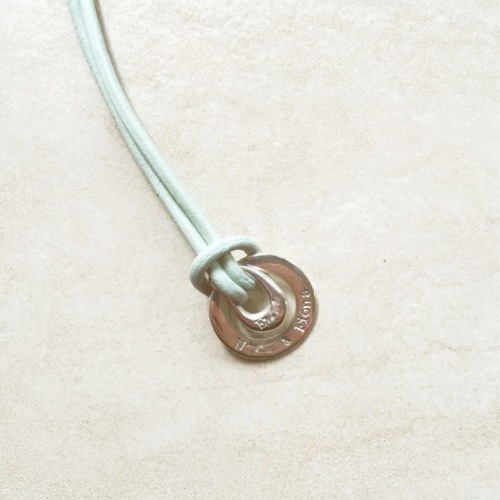 I’m just putting it out there, in case someone has it at home, maybe you know someone who does?…it’s that time of year when things happen. I’m so thankful I received a special little gift from Dani (it now fills the space of the one that’s missing and I cherish it. So if the others don’t come back, I have that) but would really love this back. And if it’s meant to return to me it will. It might not and that’s cool, but you’ve got to have that last-ditch attempt, you know?

So you know, just asking. Just in case.

Have a great weekend all…

4 thoughts on “lost and found, maybe…”

getting dizzy on ig